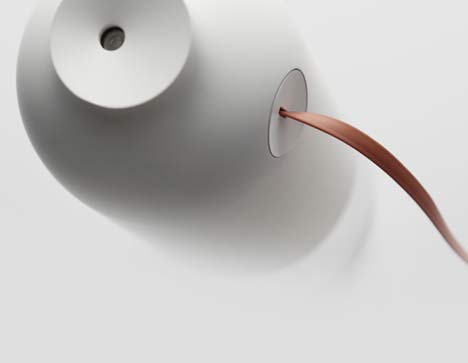 Bottle Humidifier – ‘the bottle humidifier by Cloudandco is simple and modern. Even when the product is not in operation, it’s design allows it to integrate into almost any environment. It is at once a functional product and art object. The integrated USB power cable is retractable, and also designed to compliment the form of the object.’

‘Cooper Hewitt National Design Museum invited Yeongkyu Yoo along with other 62 designers [from] all around the world for Triennial exhibition ‘Beauty’ 2016.

Yeongkyu Yoo designed PLAY as the theme of ‘Beauty’ for the Triennial exhibition. The theme of Beauty was interpreted as Play ( Spiel ). He thought Play is one of the form of the Beauty. Play can be completed by people [who] play around with objects, and controlling becomes playing. Simple objects embedded with complicating technology interact with people as its functions work.’ /

Sound 1 – ‘The 11+ Sound 1 Speaker pairs with Bluetooth enabled portable devices and computers to provide beautifully clear, crisp stereo sound. Magnets are embedded in the speakers, which enable the two speakers to be joined into a single piece, allowing them to be conveniently relocated or stored neatly in the included pouch.’ /

World Clock  – ‘The 11+ World Clock reinterprets the traditional functionality of the clock by creating a unique and playful interaction between the user and the design. Although the face of the World Clock may not seem out of the ordinary, its cylindrical body allows it to display 24 different time zones via a clever rolling mechanism.’ /