Roxxane Fly: ‘A portable LED.next luminaire with integrated rechargeable cell… diffuser surface made of polycarbonate for directing light & reducing glare by means of aligned conical indentations … integrated magnets extend the possibilities of placing the luminaire, master switch in the base, the luminaire can be operated & dimmed intuitively by its touchless gesture control system, the high degree of flexibility is achieved through a 270° rotatable 3D rod end, the luminous flux amounts to a total of approx. 400 lumens, micro-USB-port for convenient charging via PC or USB mains adaptor, delivery including USB cable (without power supply) – battery operating time: 4 to 20 hours.’ /

Modul L 196 Sequence: ‘With a height of only 18 mm, the luminaires fit seamlessly into the surrounding architecture, thus forming the perfect alternative to conventional grid-type luminaires.’ /

Modul R Project Family: ‘Ceiling & suspended luminaires… have the shortest installation time of all surface-mounted luminaires: The 24 V direct installation version & the 230 V surface-mounted version can be quickly & efficiently installed & set up using the patented Nimbus magnetic fastening system & mounting ring: the luminaire is connected to the power supply by means of a special cable with a micro-plug protected against reverse polarity.’ /

Lady Jane Family. Floorstanding luminaires designed by Sven von Boetticher / Nimbus: ‘The colourful fabric cable is plugged directly into the LED module & makes two separate components out of the head & the stand… this allows the user to simply detach the head &.. make a portable light out of the floor-standing luminaire that does not require a switch as Lady Jane features touchless control & dimming.’ / 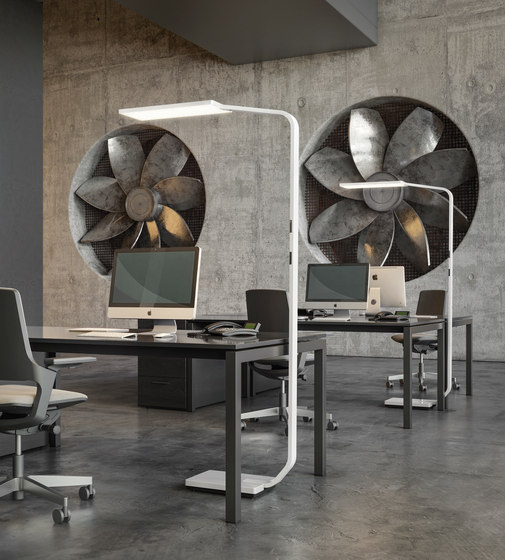 Force One Family designed by Rupert Kopp / Nimbus: Floorstanding luminaires with a head that projects unusually far over the work surface and its base disappears almost entirely beneath the desk. In order to achieve this, the designer  integrated the technical units into the base although they are usually located in the head of luminaires. This made it possible to create an extremely thin head only 20 mls thick. The result is uniform, large-surface illumination of the work area.’ /

Eloise Family. Floorstanding luminaires designed by Flo Schwab, Georg Panther / Nimbus: The tube of the reading luminaire interlocks with the ultra-slim LED luminaire head, which can be continuously rotated around its own axis. Eloise can be continuously dimmed via a touch-sensitive surface.  A going-to-bed function has been integrated that dims the luminaire within a period of three minutes before it ultimately automatically switches itself off.’ /