‘He [Piene] founded the influential European post-war movement Group Zero with Heinz Mack in 1957, as part of an effort to transform and redefine art in the aftermath of the Second World War. The name referred to the countdown for a rocket launch and, according to the group, was meant to evoke “a zone of silence [out of which develops] a new beginning”.

“Artists after the war turned against technology, because war is technology,” Piene explained to Art in America magazine in 2010. “Zero was about the pure possibilities for a new beginning.”  The experimental movement was the precursor of minimalism and conceptual art, and they challenged people’s perceptions of art, space and materials.

Piene developed the Grid Picture, a type of stencilled painting made from half-tone screens, which led to his Light Ballet series, in which light from moving torches was projected through grids, altering the viewer’s perception of space. He was also known for Rauchbilder (smoke pictures), in which the artist applied solvent to pigmented paper and set it on fire, before creating images from the soot.’ BBC  http://www.bbc.com/news/entertainment-arts-28364515 / 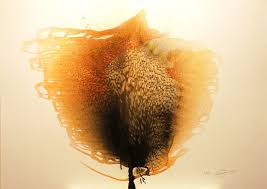