All images and text are taken from Jason Krugman’s website. Many of the objects listed below are better viewed in action on video on Jason’s site /

ORGANIC ELECTRIC (modules above): ‘is a body of artwork that uses the Light Emitting Diode (LED) as a sculptural medium. The initial exploration and concept, now greatly expanded, arose from the general rule of only using through-hole LEDs and solder as mediums.’ /

BASKET: ‘ A sheet of 1352 LEDs is rolled into a tube and connected together at its center. The top and bottom of the tube are folded backwards and fully attached to one another other yielding the final form. The form is based on a 4-sided polygonal mesh.’ /

FIREFLY: ‘ The Firefly Wind Light System revolves around a proprietary switch for sensing the wind’. /

FIREFLY: ‘The above image was part of a proposal to utilize Firefly modules to create a solar-powered, wind-sensitive skin for the Ambassador Bridge in Detroit. Coupling the Bridge’s beautiful engineering with a stunning, large scale wind installation would make it one of the most striking pieces of public art and architecture in the world.’ /

ARTIFIX MORI:  ‘As visitors enter the space, they are confronted with a series of 20 electromechanical light-emitting silk worm modules. Meter-long spring steel wires protrude from wall-mounted actuators, each tipped with a cocoon illuminated by a single white light-emmitting-diode (LED). When a visitor moves into the space, the installation responds with a flurry of patterned chaos. The modules click sharply, bouncing their cocoons up and down as if reacting to a hostile intruder’s presence. A droning sound-score adds a further intensity to the installation, which is located in a 50-ft long, glass-walled elevated walkway at 65 West 11th Street on the Thirds Floor.’ (video viewing recommended) /

SOLAR SONIC TRAIL: ‘features 10 solar powered kinetic acoustic sculptures. Modeled after the African tongue drum, each sculpture responds to the sun by producing unique percussive sounds. The sculptures gather, store and release solar energy, lifting and releasing an aluminum and rubber striker. The intensity of the sun determines how often each sculpture raises and drops its hammer, creating sound as a function of the sun’s intensity.’ /

AMP: A flexing sheet of LED lights, with movement of the central module. See video for clearer picture  /

MODAL FIELD: ‘ Its suspended array of tubular LED pixels use passive infrared sensors to detect motion and respond with cascading patterns of blue and white light.’ / 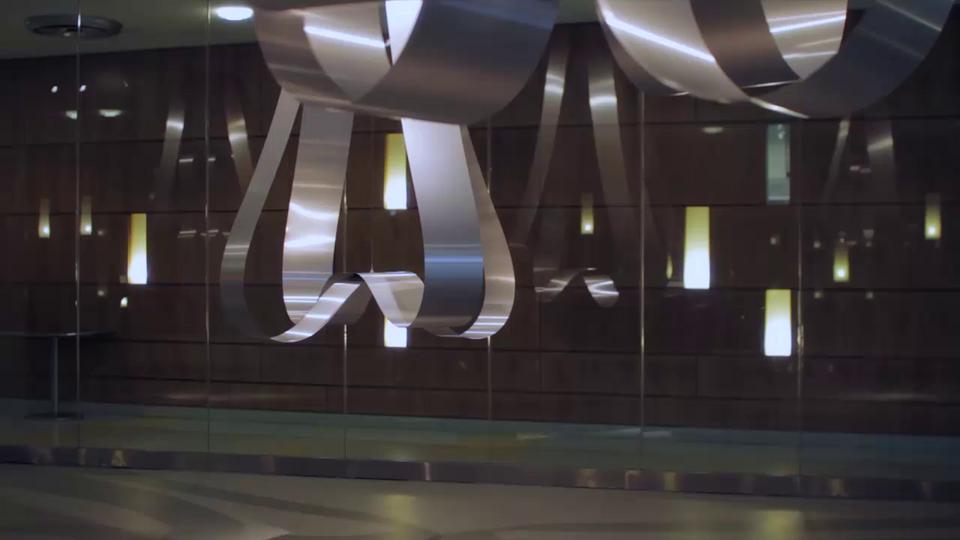 BASIS POINT:  ‘is about small movements influencing larger forms. Each sculpture is made using aluminum sheeting manipulated by a microcontroller and motor to create shiny loops of amoebic motion measuring up to twelve feet in height. While alternately mimicking the repetitive motion of machines or the billowing movement of a jellyfish, these sculptures display alternate possibilities of form in motion, gathering and reflecting light as they move.’ /

STRING: ‘Following a simple arithmetic pattern, neon orange construction string was woven through fences on the divider between the north and southbound lanes of Allen St in Manhattan.’ /